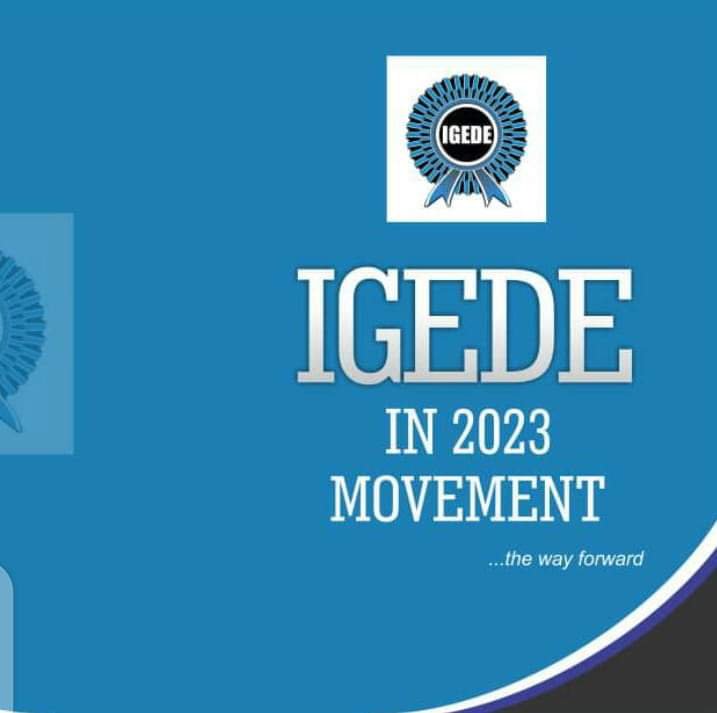 Less than 24 hours after the Peoples Democratic Party, PDP, in Oju/Obi federal constituency dissociated itself from the November 27 planned Igede Political Summit by the group known as Igede in 2023 Movement, the group has reacted in a press release and read as followed.

Setting the Records Straight by Igede in 2023 Movement.

Our attention has been drawn to a communique issued by the Peoples Democratic Party (PDP), Oju and Obi local government chapters after its meeting which held on the 22nd November, 2021, to the effect that they would be boycotting the planned Igede Political Summit scheduled to hold on 27th November, 2021 at the Multipurpose hall, College of Education, Oju, Benue State as convoked by IGEDE IN 2023 MOVEMENT, a non partisan pressure group in the mould of BENUE REBIRTH MOVEMENT (BRM).

In the Communique, the PDP is predicating its planned boycott on the lack of locus standi or competence of the Movement to convene such an auspicious political summit. Its decision is also supposedly hinged on a concocted clash of date with the Annual Convention of Om’Ny’Igede.

Given the above, and to set the records straight, we wish to categorically state that Igede in 2023 Movement has convened several Igede Political Stakeholders’ meetings with robust participation from all political actors, including members of the Peoples Democratic Party, PDP. Then, the locus standi or the competence of the Movement was roundly accepted without challenge.

Besides, the movement initiated a remediation of Aliade – Obarike Ito road when the crisis between Bonta and Ukpute in konshisha and Oju local government areas was raging as an alternative route for Igede people. This project, being a self-help project, attracted the commendations of all good spirited Igede people and was crowd-funded by the contributions from well-meaning people, including Rt. Hon. Samson Okwu, Member, House of Representatives for Oju /Obi Federal constituency, the 3 State house of Assembly members from Igede, the Chairman of Obi Local Government Council and many other prominent Stakeholders across party lines. Then, the locus standi of the Movement was not challenged. Then, one wonders why this is coming on the heels of the planned Political Summit which promises to provide a way out of the socioeconomic and political doldrums facing the Igede Nation.

On the purported clash of the event with Omi Ny’Igede’s Annual Convention, one begins to wonder when PDP has arrogated to itself the roles of the leadership and mouthpiece of Omi Ny’Igede, a body that is in itself invited to the planned Igede Political Summit.
In fact, Omi Ny’Igede has postponed her meeting to December before the movement fixed date for the summit.

For the avoidance of doubt, below are the core objectives of Igede in 2023 movement:

AN OVERVIEW OF IGEDE IN 2023 MOVEMENT:

In our collective resolve and willingness to synergize and galvanize our efforts towards correcting the issues that have slowed down Igede political and socio-economic development, there is the need for a multi-party/multi-player platform for engagement on the aforementioned concerns of Igede Nation. This is necessitated by the long-term marginalization in the scheme of political space in Benue Zone C in particular and Benue State as a whole. It is therefore incumbent on all Igede sons and daughters to be objective, honest, open-minded and forward looking with suggestions and strategies in the advancement of this initiative with the following CORE OBJECTIVES :

*To identify a common platform of convergence for non-partisan political interests that exist in Igede land with genuine love and unity of purpose.

*To clearly articulate and define Igede interest in the 2023 (and beyond) – various political positions by exploring the prospects in the pursuit of Governorship, Deputy Governorship and the Senate; and other Federal political appointments from the State, e.g. Ministers, etc.

*To foster a formidable, unified and a cohesive front for negotiations at various levels with critical stakeholders among the Idomas and Tivs our collective aspirations/agitations.

* To set practical criteria for the emergence of credible and acceptable political leadership and accountability in Igede.

*To periodically organize/create opportunities for interfaces with Igede elites where non-partisan political discussions shall hold, with far reaching recommendations on the way forward.

From the foregoing, it is necessary to reiterate that Igede in 2023 Movement remains a non partisan movement.

It is and remains a platform for dialogue and interface on the general (non-partisan) issues that concern the Igede people.

We therefore appeal to all Igede Stakeholders across party lines to attend and participate in the summit as all outcomes of the summit will be consequent on the deliberations at the summit.

For the purpose of emphasis, we therefore, appeal to the members of the Peoples Democratic Party in Oju and Obi local government areas to look beyond the communique and attend the summit en-masse.

James Ibechi is the Editorial Director of the blog www.jamesibechi.com, which is intent on spawning series of publications that would not only cater for Benue investigative reports need, but also adequately cover the entire middle belt region. Ibechi is the pioneer Editor of the premier Igede community-based Magazine called The Congress. He cut his professional teeth both at the Champion and Daily Independent newspapers where he was employed at various times as sub-editor and production editor respectively. He worked at the Voice newspaper as a reporter, and at Vanguard as correspondent before joining Daily Independent and Champion. He holds degrees in Mass Communication and International Journalism of the Benue State University, Cardiff University, Wales (Distinction). Ibechi has a particular interest in the study of political economy and equitable development. He is a frequent commentator on Igede and Benue affairs in different media, and has also become a media and political consultant. Skills: Editing, blogging, online journalism, copy editing, editorial, newspapers, news writing, media relations, magazine, publishing, press releases, investigative reporting, copy writing, featured articles, new media, interview, etc. Email: ejeibec@gmail.com 📱📞 +2348076896824, 2348108843680 View all posts by jamesibechi.com

By Abrahams Kwaghngu In every form of leadership, it has been confirmed that courage remains a key virtue for an effective leadership. Governor Samuel Ortom a grassroots political leader with nationalistic views was propelled into national consciousness in 2017 when he demonstrated unusual courage by signing into law, the Prohibition of Open Grazing and Ranches […]

How Igede nation under-developed itself: Time for paradigm shift in 2023 and beyond

Being a keynote address delivered by Prof. Johnson Onah on the occasion of the Political Summit organised by the Igede in 2023 Movement. Outline. · Preamble · Defining Igede person · Historical perspectives · The transformed Igede Nation- Education · The Church and development · Economic structures · Role of Igede Elite in the development […]

Acting Och’Idoma and the fragrance of change

By Elvis Ogenyi, PhD The African tradition allows for a perception of the king as a personality with an undying aura, permanence and longevity; a superhuman with undeadliness, abiding grace and the reverence of his subjects therefore, should a situation violate the king’s sacredness and tries to unveil his mortality through death, it is  simply […]

Acting Och’Idoma and the fragrance of change

By Elvis Ogenyi, PhD The African tradition allows for a perception of the king as a personality with an undying aura, permanence and longevity; a superhuman with undeadliness, abiding grace and the reverence of his subjects therefore, should a situation violate the king’s sacredness and tries to unveil his mortality through death, it is  simply […]

*Urge parties to zone HOR seat to Oju Igede stakeholders under the auspices of Igede in 2023 Movement have unanimously demanded the Benue South Senator of Igede extraction in the 2023 General Elections, saying that it was the turn of the Old Oju political bloc in Zone C political delineation of Benue State to produce […]

Less than 24 hours after the Peoples Democratic Party, PDP, in Oju/Obi federal constituency dissociated itself from the November 27 planned Igede Political Summit by the group known as Igede in 2023 Movement, the group has reacted in a press release and read as followed. Re: PDP to boycott Igede political summit Setting the Records […]

Zainab explained that the grant would go to about 30 to 40 million Nigerians that make up the poorest population of the country. By Editor The Minister of Finance, Budget and National Planning, Zainab Ahmed, says the federal government will remove fuel subsidies by 2022 and replace them with N5000-a-month transportation grant to the poorest […]

By Smith Akoko On her birthday, Barr (Mrs) Patricia Kupchi was recognized as “the most effective, resourceful and outstanding Igede woman in Nigeria” by the Nigerian House of Dream Parliament, one of the noblest organisations in Abuja committed to encouraging outstanding public office holders. For Patricia, it is the trio of effectiveness, resourcefulness, and distinction; […]

By James Ibechi Oju and Obi stakeholders of the People’s Democratic Party, PDP, resolved on Monday in Makurdi that the party would not participate in the planned Igede Political Summit. T he resolution which was contained in a communiqué signed by both Chairmen of Oju and Obi LGA chapters of the PDP, Hon. Atujo Oko […]

Powershift: Mark has the clincher, but Ortom kills agitation politically

If someone hazards a point that Benue Zone C’s agitation for powershift is long comatose, he will be accused of sabotage. But truth is, accusation may not alter the reality on ground. Starting from when the frontline proponent of powershift such as Sen. Abba Moro dropped guber ambition to concentrate on senatorial term two bid, […]